Proven results for our schools

I joined the board in 2008 and said we needed to have a long range plan to transform San Diego Unified into a world class school system.  The Class of 2020 was in the first grade.  I proposed Vision 2020 for Quality Schools in Every Neighborhood and it was approved by the board.  Those students are now in eighth grade and I hope to see them through to remarkably transformed high schools by the time they graduate in 2020.

The first four years were tough for education. The worst budget crisis in California history  made it a constant struggle to provide our students with the teachers and resources they need. However, by keeping our priorities straight and working collaboratively with teachers, parents, and the San Diego community, we have:

Kept teachers in the classroom

Ensuring students have the teachers they need has been my top priority. Only with a stable staff and reasonable class sizes can we continue to prepare our kids for college and careers. . Despite 4 years of the worst state funding crisis in the history of California, class sizes in our District are now among the lowest in the state, particularly for our youngest students.

Keeping Teachers in the Classroom For Our Kids

During my first four years on the board, our test scores steadily went up in math, language arts, science and social studies, to the point where we now have the highest achievement levels in the history of our District for every group of students. We are in first place among the large California districts in both our reading and science results. We are recognized as one of the leading urban districts in the nation.

We are also excelling in other areas, and on metrics beyond test scores. In 2010 we received a national award for outstanding music education from the Kennedy Center. We are also focusing on physical fitness, character education and critical thinking. Our graduation rates are up, our dropout rates are by far the lowest among large California districts, and the State Superintendent of Public Instruction has recognized us for our success in improving student attendance rates.

In 2013 we were one of only four urban school districts in the nation to receive the prestigious Broad Prize.  This is awarded to America’s most improved school districts.  The district was recognized for the Quality Schools in every neighborhood initiative, a strong emphasis on positive environment and a nationally recognized technology program.

Rather than jumping on the bandwagon of the latest top-down reforms, we have achieved success by actually listening to the people working directly with students in the classrooms – our teachers, principals, support staff, parents, and students themselves. By listening rather than dictating, we have learned about exciting success stories of student achievement in neighborhood schools where everyone works together and kids don’t fall through the cracks. This community-based reform model, which continues to produce proven results, lies at the heart of our approach to improving schools. 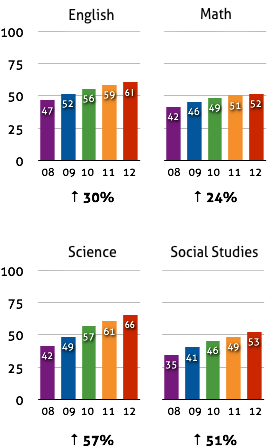 Cut administration and sent the money to the classroom

As the state budget worsened, we cut hundreds of millions from central administration, consultants and outside contracts. In my first year on the board, we actually increased the money that we sent to the classroom. As the state cutbacks to education reached historic crisis levels over the last four years, we worked collaboratively with our employees where adults agreed to sacrifice pay and benefits in order to protect low class sizes and critical programs for students.

At the same time, I have advocated for adequate funding from Sacramento and Washington. I am organizing other board presidents across the state to fight for funding for our schools. We are all responsible for preserving and improving great public schools, and we must all follow the example of our District employees in being willing to make sacrifices for the sake of our next generation.

John was in Sacramento to hear Gov. Brown’s “State of the State” address, and to personally tell the governor about the devastating impacts that continued cuts could have on our students and schools.

Crafted a long-term vision for our schools

I authored the Vision 2020 plan for educational reform in San Diego Unified. It broadens the ways in which we measure student success to go far beyond standardized test scores. It includes critical thinking, creativity, physical fitness, music and the arts. It places an emphasis on our neighborhood schools as the backbone of local communities, with a quality school and great teachers in every neighborhood. It means our students will graduate from high school ready for both technical careers and college.

To increase community involvement in our schools, we have developed school clusters in every neighborhood. They are comprised of the neighborhood high school and the elementary and middle schools that feed into it. While only a few of these existed when I came on the Board, we now have 16 clusters in all of the communities of San Diego. San Diego Unified is a large and diverse district, so the clusters ensure our schools are responsive to the needs of their community.

To prepare our students to lead the 21st century, we have implemented the i21 (Interactive 21st Classroom) program, which will equip every student with a laptop or iPad by 2014. Coupled with new classroom technology, digital learning tools, and training and support for our teachers, i21 will help personalize learning and train our students on the tools of tomorrow. We are now over halfway in the rollout of this program, and San Diego Unified is recognized as a national leader in educational technology.

A look inside an i21 classroom

SD Unified rolls out iPads in a big way

We have come a long way in the past four years to improve the quality of education in San Diego. Now we must accelerate that progress in the next four years. We now have the structure for working towards a quality school in every neighborhood by 2016. Our kids cannot afford to wait. We know what works. We must make sure our teachers and schools are given the tools and support they need to build a world class school system for our kids.

Keep John's steady leadership on the school board