John Lee Evans was elected to the San Diego Unified School Board in December 2008. In December 2011 he was elected President of the Board. He has promoted having a broad and individualized 21st century curriculum that will prepare all students for college and/or career. He believes that this is best accomplished by having teachers collaborate in professional learning communities. He has supported the development of a community schools model that encourages greater input and innovation at the local level.

Dr. Evans has focused on the long term plan for San Diego schools, which is embodied in the Vision 2020 for Academic Excellence. This plan, developed in cooperation with other board members gives the Superintendent and the community a clear direction to lead us to schools of excellence between now and 2020. There is a current initiative to bring a quality school to every neighborhood.

John Lee Evans is a product of public schools that he attended when he was growing up in Oregon and Washington. He grew up in small towns that believed in providing quality education to their children. His mother was a schoolteacher. Education was highly valued, resulting in all five children earning college degrees, four earning Masters and two earning doctoral degrees.

John earned a Bachelor of Arts in Psychology. While a college student he helped found and direct a community preschool and elementary tutoring center. He gained international experience by studying for one year at the University of Madrid.

He served as a Peace Corps Volunteer in Honduras for three years. He also directed high school students on social service projects and taught leadership courses to community leaders.

In San Diego he taught Spanish at a language institute and then became the director of the institute. He also taught the institute’s accelerated learning techniques to teachers, school administrators and education students. As the director, he learned to balance his educational idealism with the practicalities of running a business.

John taught for over eight years for the San Diego Community College District Continuing Education Division as an ESL Instructor. He has a Lifetime Credential to teach at that level in California. He was a member of the San Diego Adult Educators. He also taught psychology at Southwestern College.

As a parent, Dr. Evans has been a very active volunteer in his children’s classrooms. He was on the School Site Council at Fletcher Elementary, a classroom and PTA volunteer at Spreckels Elementary, a group leader for seminar parents at Standley Middle School and on the Governance Team of University City High School. He and his wife have lived in San Diego since 1979, including Pacific Beach, Mira Mesa and University City. He believes that every child in San Diego should have access nearby to a good public school no matter where he or she lives. 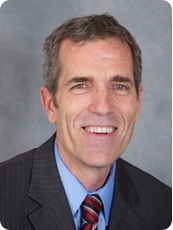 "I've been professionally involved in education from the preschool to the college level. As a psychologist I work with children and adolescents. As a parent and community member I believe that every child in every neighborhood of San Diego deserves a 21st century education." 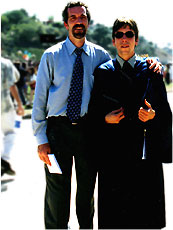 John with his son at graduation from UC High

Keep John's steady leadership on the school board